For the past four months I have been 🎶 wishin’ and hopin’ and thinkin’ and prayin’, plannin’ and dreamin’🎵 that my cancer would be in full retreat by the completion of this first treatment phase. So, I was devastated to learn that I had experienced only “a response” to the often taxing 13-week chemotherapy regimen. The ultrasound showed that some of the masses and lymph nodes had shrunk, but not by much. Of course, “limited” is not the response description any cancer patient wants or expects after months of harsh, weekly doses of chemotherapy and an immunotherapy drug that has reportedly produced “phenomenal” results in others. Diagnostic testing results, (an MRI with contrast and ultrasound), were delivered to me by my surgeon, Dr. Teshome, at our recent follow-up appointment. As I sat atop the table, exposed and vulnerable, I apologized for crying. “It’s ok to cry,” said Dr. Teshome as she held my hand. “I’m just really disappointed,” I said in a soft voice, as I tried in vain to hold it together. As Dr. Teshome laid me flat on the table and began performing her physical exam, she reassured me constantly. “I don’t want you to feel discouraged,” she said. “You had a response. That’s what matters. What we don’t want to see is a complete lack of response, or metastasis.” She continued, “You still have the “AC” (Adriamycin and Cyclophosphamide) treatment to get through, then we’ll take another look,” she said. “And, the true picture of how well you responded to chemotherapy can only be determined by the pathology report after your AC treatment and mastectomy.”

Since completion of the first regimen, and my recent progress report, AC treatment had come to symbolize for me a “last chance.” As the first round had produced only “a response” and not a “phenomenal response,” the advent of AC treatment carried greater weight and gravitas, at least in my mind. What I have since learned, repeatedly, from my entire medical team is that “a response” is a good thing, indeed, and that AC chemotherapy is far from my “last chance” for recovery. Surgery and radiation will deliver the final 1-2 punch.

Stupid cancer…thinks it’s so tough…Well, it may have put up a pretty good fight in the first round, but the “Red Devil” jumped into the ring this past Thursday, and there’s a brutal beatdown ’bout to go down.

Now 4 days post treatment, the side effects of the first “Red Devil” infusion have been only slightly worse, so far, than the prior regimen’s. I had been quite anxious about how I would respond given that I was already weakened by the first treatment phase. But, the IV anti-nausea meds, of which I was given 3 this time, have performed their job well. I transitioned to oral Zofran on day 2 post treatment, as advised, just to be safe. While I still have to force myself to eat, I am able to keep food down. I had been experiencing intermittent nausea and occasional vomiting the week prior, despite a one week break in treatment. But, oh…the fatigue. It never seems to lift. I am tired all.the.time. And, I am achy, achy all over.

The severe achiness is a side-effect of the white blood count stimulator, Neulasta. Following prior infusions I had to return to the hospital for 2 consecutive days in order to receive Neupogen, a different medicine injected in the stomach for the same purpose. The Neulasta, however, was automatically delivered 27 hours post treatment via an on-body injector, saving me another trip to the hospital. Nurse Saly applied the device to my stomach, triggered the syringe, and sent me home. At 12:50 am the following morning, the device began to beep, then injected the medicine. On a scale of 1-10, the pain was between 3-4, so I’m certain it would have awakened me had I not already been awake anticipating the event.

Despite my fears and concerns, I was somewhat eager to embark on this next part of the journey. AC chemotherapy commencement meant the starting bell had sounded, the fight had resumed, and I was still on my feet. In my corner, the MD Anderson army of cancer fighters, dear family, devoted friends, and most importantly, G-d. In cancer’s corner some previously beaten and battered cells. Yes, entering the fight means I, too, will sustain some damage, but side-effects will reportedly begin to dissipate some 3-5 days post treatment. Then, I’ll have about 2 weeks to strengthen and recover before the next infusion delivers a combination of jabs and punches designed to put my opponent on the ropes. We’ll duke it out for a total of 4 rounds before I earn the privilege of ringing the victory bell. Barring any delays, my final chemotherapy treatment will occur on 12/28/17.

More diagnostic testing will follow the completion of AC treatment, along with a 4 week recovery break. Surgery is unscheduled as of yet, but is predicted to occur in late January given there are no delays.

My dear friend, Janice Gerson, whom I have known since we first met some 22 years ago while participating in RIE parent-infant-toddler classes, traveled from Los Angeles to visit me. Along with sisters, Sally Jo and Jenny, Janice accompanied me to my first AC infusion. Generally, I do not feel an inordinate need to have someone sitting with me in my infusion suite, as I’m not always up to providing good company for my companion. And, while I understand that no one expects me to “entertain” them, it can feel awkward and rude to not be somewhat interactive. I usually read, use my iPad, or watch television. And, my nurses are at my side with such regular frequency that I am never completely alone for very long. It was comforting and reassuring, however, to have these thoughtful and supportive women surrounding me for this milestone. I am truly blessed with some amazing allies. 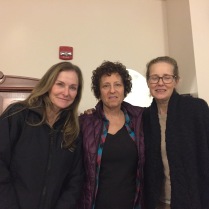 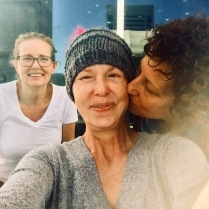 Sally Jo, Janice and me 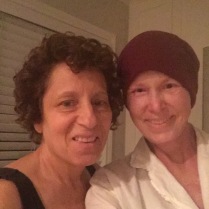 Friend, Janice Gerson, and me

Like Houston’s beloved Astros, I feel as if I’ve finally made it to the World Series (of treatment)…albeit a little beat up. Both of our teams need to battle it out and win the prize in 4. And, while I knew the first phase was just a start, or trial study test, I was still hoping for a shut out. Short of that, my team is still ahead at the top of the 9th, has the momentum, a tough starting line-up, and possesses formidable “closers” in AC treatment, surgery and radiation.

This entry was posted in Uncategorized. Bookmark the permalink.